Who is Mohammad Dahlan?

http://electronicintifada.net/cgi-bin/artman/exec/view.cgi/19/6275   Who is Mohammad Dahlan?Arjan El Fassed, The Electronic Intifada, 20 December 2006 Mohammed Dahlan, PLC member of Fatah, speaks during a press conference after Palestinian President Mahmoud Abbas delivered a speech to the nation from his headquarters in the West Bank city of Ramallah December 16, 2006. (MaanImages/Fadi Arouri) Some have called Mohammad Dahlan the Palestinian Ahmad … END_OF_DOCUMENT_TOKEN_TO_BE_REPLACED

The CIA and Fatah: Spies, Quislings and the Palestinian Authority

June 20, 2007 Op-Ed Contributor What Hamas Wants By AHMED YOUSEF Gaza City THE events in Gaza over the last few days have been described in the West as a coup. In essence, they have been the opposite. Eighteen months ago, our Hamas Party won the Palestinian parliamentary elections and entered office under Prime Minister Ismail Haniya but never … END_OF_DOCUMENT_TOKEN_TO_BE_REPLACED 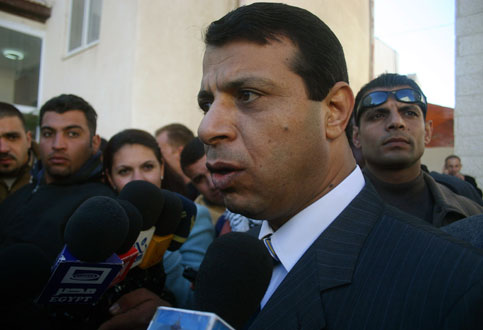