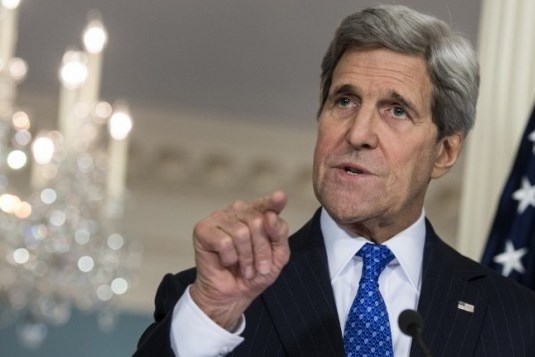 BETHLEHEM (Ma’an) — US Secretary of State John Kerry emphatically denounced Israel’s settlement policy for eroding the path to a two-state solution in a speech on Wednesday, warning of a one-state reality and “perpetual occupation.”

“The status quo is leading towards one state and perpetual occupation.” Kerry stated. “The truth is that trends on the ground — violence, terrorism, incitement, settlement expansion, and the seemingly endless occupation — they are combining to destroy hopes for peace on both sides and increasingly cementing an irreversible one-state reality that most people do not actually want.”
“If the choice is one state, Israel can either be Jewish or democratic, but it can’t be both.”
In what was many considered to be the strongest language by the Obama administration on Israel’s illegal settlement construction in the occupied Palestinian territory, Kerry reaffirmed his support for a two-state solution based on an Israeli and a Palestinian state along 1967 lines with Jerusalem as the capital for both states.
In response to claims made by Israel that settlements are not an obstacle to peace through comparing Jewish Israelis residing in the occupied West Bank in contravention of international law and Palestinians living in Israel, Kerry said the argument “misses a critical point: the Arab Israelis are citizens of Israel, subject to Israel’s laws. Does anyone really believe the settlers will agree to submit to Palestinian law in Palestine?”
He also criticized the proponents of a reality in which settlers could remain Israeli citizens under the protection of the Israeli army — as they do now — in effect isolating Palestinian areas into non-contiguous enclaves — as they currently are — for making a viable Palestinian state impossible.
“A settlement is not just the land it’s on, it’s also what the location does to the movement of people, what it does to the ability of a road to connect, what it does to the sense of statehood that is chipped away with each new construction. No one thinking seriously about peace can ignore the reality of the threat settlements pose to peace.”
Kerry criticized Netanyahu for publicly claiming to advocate a two-state solution while his government has shifted farther to the right, and as a number of Israeli ministers and lawmakers have called for the occupied West Bank’s complete annexation.
“His current coalition is the most right-wing in Israeli history, with an agenda driven by its most extreme elements,” Kerry said. “The result is that policies of this government — which the prime minister himself just described as ‘more committed to settlements than any in Israel’s history’ — are leading in the opposite direction, toward one state.”
Kerry’s speech came days after the US abstained from a vote on a UN Security Council resolution condemning Israeli settlements and reaffirming their illegality under international law.
He defended the US’s decision not to veto the resolution, highlighting that “Virtually every country in the world other than Israel opposes settlements,” including “many friends of Israel — including the United Kingdom, France and Russia — all of whom voted in favor of the settlements resolution in 2011 and again this year, along with every other member of the Council.” The US had used it veto power to block the 2011 resolution.
“In fact, this resolution simply reaffirms statements made by the Security Council on the legality of settlements over several decades; it does not break new ground.”
Kerry also defended the Obama Administration’s record in supporting Israel.
Despite the US government under Barack Obama having routinely condemned Israel’s settlement expansions, US officials have yet to take any concrete actions to end settlement building and instead inadvertently encouraged the enterprise through consistent inaction over Israel’s violation of international law and continued support of the Israeli government through inflated military aid packages.
“No American administration has done more for Israel’s security than Barack Obama’s. The Israeli Prime Minister himself has noted our unprecedented military and intelligence cooperation,” Kerru said.
He also called US democracy into question for continuing to back Israeli policies: “How does Israel reconcile a permanent occupation with its democratic ideals? How does the US continue to defend that and still live up to our own democratic ideals? Nobody has ever provided good answers to those questions because there aren’t any.”
After the speech, PLO Secretary General Saeb Erekat released a statement on behalf of Palestinian President Mahmoud Abbas that said: “The minute the Israeli government agrees to cease all settlement activities, including in and around Occupied East Jerusalem, and agree to implement the signed agreements on the basis of mutual reciprocity, the Palestinian leadership stands ready to resume permanent status negotiations on the basis of international law and relevant international legality resolutions, including UNSC 2334, under a specified timeframe.”
Israeli Prime Minister Benjamin Netanyahu reacted with outrage and “deep disappointment” to the speech, saying that “Israelis do not need to be lectured about the importance of peace by foreign leaders.”
Netanyahu called the speech “unbalanced” and “obsessively focused” on settlement, accusing Kerry of paying “lip service to the unremitting Palestinian campaign of terrorism” against Israel.
Earlier, US President-elect Donald Trump tweeted in support of Israel, saying he would not allow it to be treated with “disdain and disrespect,” and urged Israel to “stay strong” until he assumed office next month.
The US has led the majority of efforts towards peace negotiations, all of which have failed to end the decades-long Israeli military occupation or bring Palestinians closer to an independent contiguous state. Meanwhile, a number of Palestinian activists have criticized the two-state solution as unsustainable and unlikely to bring durable peace, proposing instead a binational state with equal rights for Israelis and Palestinians.