‘We know what we want’

The Palestinian prime minister, Ismail Haniyeh, talks to Rory McCarthy about his hopes for a national unity government 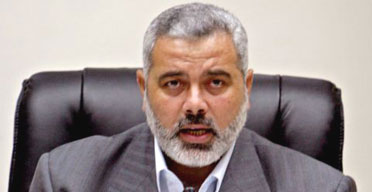 Q: Do you think there is an agreement coming soon that will see the release of [the captured Israeli soldier] Gilad Shalit?

A: There are ideas being talked about between the Egyptians and the Israeli side, but I have no information about that. There are certain efforts going on but nobody has any idea.

Q: There have been reports that he might be released.

A: They are just rumours. I don’t think there is something really serious going on. It will take a longer time. I have no information about what has been published.

Q: There is a big economic crisis in Gaza. What is your government doing about this?

A: The reason for this is the siege caused by the American and Israeli embargo and the way the Europeans dealt with it. This is because of the democratic choice of the Palestinian people. The government has taken a big effort to solve this problem. We are paying part of the wages for the education ministry; even today we are paying the teachers part of their wages. But the problem is complicated with the embargo and the siege.

Q: Many people here and in your movement feel there has been a loss of direction among the Palestinians. Do you feel that?

A: We know what we want. We want to liberate our land. At the same time we want a stable economy, natural and open relations with the world, to end all the chaos on Palestinian land. But the problem is not what we want but to have the world standing by us, helping us to achieve that.

Q: There are many now who say there should be a national unity government and one minister from your government tried to resign yesterday over this. What happened?

A: We are in favour of the creation of a national unity government. This is our choice. But yesterday’s resignation had nothing to do with it. I refused his resignation. It is possible that he will come [to the cabinet meeting today]. His resignation is over now. It is not accepted.

Q: What is stopping you from forming a national unity government? What are the hurdles?

A: We are not talking about problems, only procedures to complete the discussion. I hope this will be completed in a short time.

Q: It is said you are going to make an announcement later this week?

A: Yes. It will be a comprehensive speech, about the whole thing. That will be one of the subjects.

Q: If a national unity government is formed does that mean Hamas will recognise Israel?

A: The national government has a programme that relates to the adjusted prisoners document.

Q: In that programme will there be a recognition of Israel?

A: The programme is the prisoners’ document. You can read it yourself.

Q: In a new government will you remain prime minister?

A: There will not be a problem to select the prime minister. The majority in the parliament will head the government.

Q: Hamas will continue to lead the government?

A: This is the agreement with the president.

Q: Do you think the international community, America and Europe, will accept that and give the money that has been frozen?

A: First of all, everybody has to respect the choice of the Palestinian people. The European position is more positive than the American position.

Q: But you’re confident that even if Hamas remains at the head of a national unity government that the money that has been stopped will come to the Palestinian Authority?

A: That’s what we talked about with President Abu Mazen [Mahmoud Abbas]. He was optimistic that this would happen.

Q: Going back to Gilad Shalit, do you think that the operation to capture him was a mistake considering the damage that has been done?

A: It happened. The Israeli aggression was too big for this kind of an operation. The Palestinian people knew the big operation by the Israelis was not about the soldier, it was to eliminate the government.

Q: Do you feel that Israel wants to eliminate your government?

A: It is very clear, yes. We have $300-400m held by the Israelis and it is our money. What do you think? That would have solved our salary problems here. The taxes and all these imports and exports.

Q: Many of your senior politicians from the legislative council, including the speaker of parliament, have been arrested. How badly has that affected your ability to run a government?

A: This assures again that Israel is keen to eliminate this government. This has happened for the first time, the arresting of all these people with no excuse whatsoever, bypassing democracy. The danger of all this is to create a political vacuum. That can lead to chaos and a situation even more dangerous than we are in now. It can push people to lose hope in the agenda of democracy and political activities and that is what we don’t want.

Q: Do you think they might be released under some kind of agreement with the Israeli government?

A: They have to be released. They are political prisoners. They are all politicians. These people are elected by the Palestinian people.

Q: One year ago when the settlers left Gaza there was an opportunity for Gaza to grow more prosperous. Do you feel that opportunity has gone?

A: We cannot lose hope. What kills these dreams is the occupation.

Q: There is talk at the UN General Assembly this month that there will be a new peace initiative. Does this have a chance of success?

A: There is a proposal already – the Beirut initiative. Nobody told us what’s going to be in this new initiative. It all depends on the Israeli position.

05.09.2006: Hamas on the brink of deal to lead new coalition in move to end funding crisis