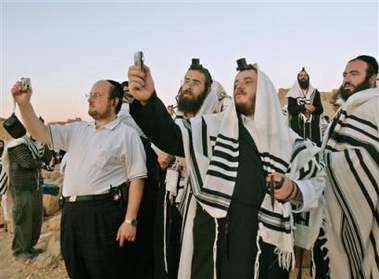 A report issued by the Saudi Al-Watan news paper revealed Saturday that Jewish rabbis in the Zionist entity have issued a religious edict allowing the killing of Palestinian women and children and exonerating every Jew doing such horrible thing.

According to the paper, the rabbis opined that the Israeli massacres in Gaza Strip falls in line with Jewish teachings that consider such killing as “mass punishment to the enemies”.

The paper also added that one of the rabbis opined that there would be no problem at all in exterminating the Palestinian people even if one million or more of them were killed at the hands of the occupation troops.

Citing verses from the Book of Geneses, Jewish rabbi Mordachi Elyaho, who is the religious reference of the popular religious current in the Zionist entity sent outgoing Israeli premier Ehud Olmert a weekly leaflet containing articles allowing the Jews to carryout the idea of massive punishment against the enemies in accordance with the ethics of war in the Torah, the paper pointed out.

“This standard could also be applied to the case of Gaza as all Gaza inhabitants bear the responsibility because they didn’t do anything to stop the firing of Qassam Brigades” said Elyaho in his letter to Olmert, urging him to continue the military aggression on the Palestinians because “harming innocent Palestinians was a legitimate matter.”

Yesrael Rozin, another fanatic rabbi, was also quoted as saying that law of the Torah stipulates the killing of men, children, women, elderly, infants, and animals [of the enemy], the paper furthermore added.

“The Psalms says “I should continue chasing my enemies and arrest them, and I won’t cease till I finish them completely”, the rabbi said according to the report.