Syria: The UN is Turning Butchers into Partners for Peace 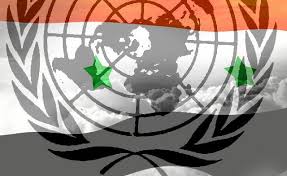 Syria used to be among the most self-reliant and economically independent states until the present crisis was sparked in early 2011. It is now a destroyed country with more than 120000 people killed – almost equal to those injured and physically damaged for the rest of their lives – and millions displaced, 2.5 million internally displaced refugees and between 6.5 and 7 million externally displaced refugees. We don’t even know how many Syrian orphans and widows there are yet.
The UN now appeals for help to deal with the refugee crisis in Syria. Two of the main perpetrators of the crisis, Saudi Arabia and Qatar, have been asked to provide help by theorganization. Saudi Arabia, Qatar, Turkey, France, the UK and the USA are the same countries that brought death and destruction to Syria and its people. But the UN wants those with Syrian blood on their hands to help heal and rebuild Syria.
Who is the UN trying to fool? It has been complacent in the plots against Syria. The organization has done nothing to stop regional and Western interference inside Syria.
Are we to believe that the same butchers that attacked and invaded Iraq, Afghanistan and Palestine via Israel, their illegitimate proxy entity, really care about the democratization of Syria and human rights for its people?
***
Obama’s administration had voted against the Palestinian November 2012 bid for “observer state status” at the UN, has threatened a war against Syria, and declared that the puppet Syrian National Coalition is the only representative for Syrian people. It has wanted nothing short of regime change in Syria.
Turkey’s Erdogan has been an underhanded player. He has acted as an agent of death under the guise of supporting democracy in Syria. This is the same Erdogan who continues to inflict death and misery on the Kurdish population in Turkey, Syria and Iraq with his F16s and tanks because they dare to ask for self-determination and equal rights. We all remember very well his response to the demands of his own citizens for democracy in Istanbul’s Taksim Square
Saudi Arabia sends tanks to Bahrain to suppress and oppress unarmed Bahrainis with legitimate demands for political reforms and equality before the law. The same Saudi Arabia crushed its own unarmed internal opposition simply because they wanted democracy and equality as well.
Qatar, the devil behind the destruction of Libya, has not been satisfied with the catastrophic outcomes there. Doha wants to duplicate Libya’s fate for Syria.
***
The “death triangle” of Turkey, Saudi Arabia and Qatar, an unholy alliance, has been arming and financially supporting the “Syrian opposition” and sending murderous mercenaries who committed atrocities and extreme violent acts against Syria, its people and institution. Their deadly and direct intervention in Syria are paving the way for the “dogs of war” to be unleashed at the “cradle of civilization.”
The calamity in Syria is not contained to Syria’s borders only. It has very dangerous implications for the region as a whole and the Palestinian Question in specific. When countries are divided based on vicious sectarian lines and death imposes its toll on the people in the region, Palestine will be forgotten.
The real plan is to get Syria to submit, suffocate any resistance to American hegemony and to give Israel the upper hand to control the region. After Syria is conquered or destroyed, the next phase it to move to the next countries resisting. If successful, the war against Syria will not end with Syria. The unholy alliance of  NATO, Saudi Arabia, Turkey, Qatar and the fundamentalists have been trying to destroy Syria, partition it, and at least make sure that no strong government remains in place that can stand up to Israel and American hegemony. It seems that the reactionary, anti-secularists, anti-Iran and anti-resistance Gulf regimes desire to fight to the last Syrian drop of blood in order to spite Iran and to serve US and Israeli interests.
While Lebanon was burning in the summer of 2006, the USA blatant supported Israel’s brutal attacks on Lebanon and declared the beginning of the “New Middle East.” Speaking from Tel Aviv, Condoleezza Rice announced this “New Middle East” at a press conference. This call for “New Middle East” is almost entirely based on the thesis of “Blood Boarders” that was published by Ralph Peters with a proposed map redrawing the region. Interestingly enough, the map was removed from the original article, but it still exists on YouTube and other sites.
Syria is merely part of what Peters wrote about in 1997: “There will be no peace. At any given moment for the rest of our lifetimes, there will be multiple conflicts in mutating forms around the globe. Violent conflict will dominate the headlines …The de facto role of the US armed forces will be to keep the world safe for our economy and open to our cultural assault. To those ends, we will do a fair amount of killing.”

Ali Mallah is an anti-war and  community activist. He is the former Vice-President of the Canadian Arab Federation and a member of the National Steering Committee of the Canadian Peace Alliance and the coordinating committee of the Toronto Coalition Against the War.  He was a board director for Alternatives Canada, Urban Alliance on Race Relations, and Anti-Racism Task force. He has also been a member of  the  International Central Committee of the Global March to Jerusalem, the Gaza Freedom March Initiative, and is a founding member of Canadian Boat to Gaza.