Of note this period

 Escalation in the conflict in the Gaza Strip:

were also killed in the attack and an IDF solider was taken captive. Since this time a

no fuel supplies are reaching the Gaza Strip. On 27 June Erez was reopened for 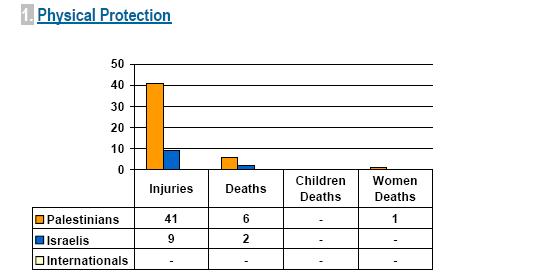 Israel (mainly towards Sderot and the western Negev).

Beit Hanoun (Gaza Strip). The IAF also conducted one air strike in the Gaza Strip on 21

June (casualties reported in the incident description below).

year-old man were killed by the IAF and another 11 people injured, including six children,

when an IAF missile targeted a vehicle traveling in Khan Younis (Gaza Strip). The

missile missed the vehicle and hit a house. All causalities were from the same family.

 21 June: A 30-year-old Palestinian man from the H2 section of Hebron city (Hebron) was

stones at him on his way home.

 21 June: A 36-year-old Palestinian man from H2 section of Hebron city (Hebron) was

 21 June: One Israeli woman was injured when Palestinian youths stoned an Israeli car

OFFICE FOR THE COORDINATION OF HUMANITARIAN AFFAIRS

 21 June: A 21-year-old man Palestinian man was killed during an exchange of fire in

Camp No. 1 (Nablus) with the IDF. Three other Palestinians males were injured (18, 25

and 27 years old) by live ammunition.

 21 June: The IDF entered Nablus city (Nablus) and a confrontation took place with

one by shrapnel and 11 by rubber-coated metal bullets). Seven of the injured were

 22 June: A 12-year-old Palestinian boy from the H2 section of Hebron city (Hebron) had

while he was on his way home.

 22 June: A 17-year-old Palestinian boy from Surif (Hebron) was injured when IDF

 22 June: A 25-year-old Palestinian male from Ramallah was shot and killed by an IDF

Undercover Unit during a military operation in Ramallah city.

 23 June: A 23-year-old Palestinian man from the H1 section of Hebron city (Hebron) was

injured after IDF soldiers physically assaulted him during a house search.

 23 June: One of the Palestinian woman injured in an IAF air strike two days earlier in

 23 June: A demonstration against the construction of the Barrier was organised in Bilin

metal bullets at the demonstration injuring one Palestinian. Cases of tear gas inhalation

were also reported after the IDF fired tear gas canisters (not included in the weekly total).

 23 June: A Palestinian male in his 20s was injured by rubber-coated metal bullets in

Nablus city (Nablus) during confrontations between the IDF and Palestinian stone

 25 June: Two IDF soldiers were killed and four others injured during an attack by

 25 June: Two Palestinian boys (both aged 14 years) were injured during a confrontation

between the IDF and Palestinian stone throwers in Nablus city (Nablus). One of the boys

physically assaulted by the IDF soldiers.

 26 June: Four Israelis in Sderot were injured by three homemade rockets fired from the

 26 June: A 52-year-old Palestinian man from Hebron city was injured when a group of

 26 June: Two Palestinian males were injured by live ammunition when an IDF soldier

shot at them near Ash Sheik Sad checkpoint (Jerusalem).

 21 June: A bomb went off in a car driven by a member of the Fatah dominated

 21 June: Masked gunmen opened fire at two Fatah members when they were near their

to Nasser hospital after they sustained gunshot wounds to their legs.

 22 June: A bystander was injured in an armed dispute between two Palestinians in Deir

 23 June: Three Palestinians were injured in an armed dispute between two families in

 23 June: A Palestinian man was injured in an armed dispute between two families in

 23 June: A bystander was injured when members of the Hamas dominated Executive

 24 June: A Palestinian man was severely beaten after being kidnapped by an unknown

 24 June: A PA Intelligence Service officer was shot in both legs after being kidnapped by

 24 June: Armed clashes continued between the ESF and PSF and one PSF member

 24 June: A Palestinian was injured when an explosive device went off while handling it

at him in Khan Younis (Gaza Strip).

 27 June: A member of Hamas was injured in an armed clash with the PSF in Khan

 27 June: A 21-year-old Palestinian man was killed and another five injured in a car

 21 June: The IDF demolished a house in Shufat (Jerusalem) due to reportedly being

built without a permit. Five people were made homeless.

 21 June: During an IDF military operation in the centre of Nablus city (Nablus),

confrontations took place between the IDF and Palestinians demonstrators (the

Palestinians were throwing stones and Molotov cocktails at the IDF). One IDF jeep was

the IDF jeep. The bulldozer damaged parked Palestinian cars and spread fire from the

burning jeep to parked vehicles and to nearby shops. According to an assessment

 22 June: A group of settlers from Yitzhar settlement entered the village of Einabus

(Nablus) and burned and destroyed three vehicles belonging to Palestinians.

25 June: A group of settlers from Yitzhar settlement set fire to a grove of olive trees near

26 June: A group of settlers from Yitzhar settlement set fire to a grove of olive trees near

settlement (west of Nablus) to install fence and a wall around the settlement.

No incidents to report.

− Land levelling continues around Avnei Khefets and Enav settlements for the

construction of a new fence around the settlements.

and between Azzun and Kafr Thulth.

around Ariel settlement and near Az Zawiya and Deir Ballut villages.

and At Tira villages. Land levelling for the last section of the Barrier in Beit

Sira is continuing between the village and Makkaim settlement. The

construction of the special security arrangements as part of the Barrier